Learning to Govern — Inside the Kentucky Youth Assembly 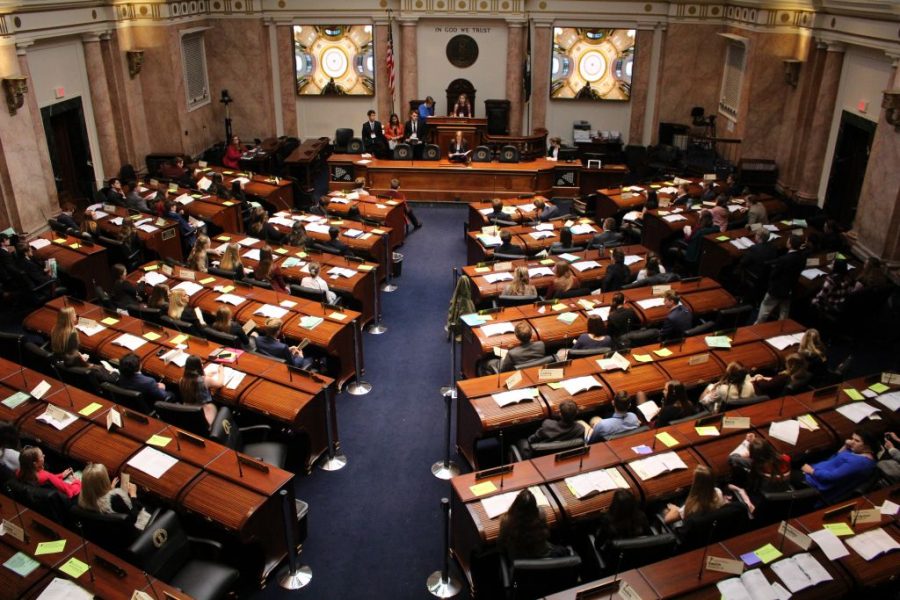 Congratulations to the KYA delegation. Every year they make us proud of their hard work and dedication. This year was special for several reasons.
First, as a delegation they won the Honor Level Service Award for their hours serving the community and for money collected to help charities.

Second, their individual awards showed their preparation and their ability to speak and debate:

Evan Walker — Outstanding Delegate
Ben Taylor– Outstanding Speaker
Will Hodge — Outstanding Speaker
Ben also wrote a bill that not only passed the House and the Senate, but it was signed into law by the governor of KYA. His bill will be presented to the politicians in Frankfort.
Peyton French was elected to become the next President of the Commonwealth Senate.
We are proud of the leadership of Cian Callahan and Drew Grimm, the presidents of Trinity’s KYA.
Junior’s Powerful Message Resonates with KYA Assembly
French Elected 2019 Senate President

by Editor in Chief Matt Gadd

Stricken with sadness, Trinity junior Peyton French was silent at his first Kentucky Youth Assembly. But now he’s using his former sadness as motivation to achieve big goals at KYA.

After days of campaigning at this year’s conference, Peyton French will be the 2019 KYA Senate president.

Students from sixth grade through 12th can attend the three-day KYA conference, during which students debate different legislative bills.

On the second day, students visit Frankfort and debate bills in the Kentucky state capitol building. If a bill passes through the House of Representatives and the Senate and is signed by the KYA governor, the bill will be presented to the governor of Kentucky.

Trinity junior Ben Taylor’s bill passed through the House of Representatives and the Senate, and it was signed by the KYA governor. Taylor’s bill was to grant convicted felons the right to vote.

Senior Drew Grimm, Trinity Y-Club co-president, has attended the conference every year since the sixth grade. Grimm described the conference as “a unique three-day, mock-debate assembly, where students from all over the state come together and debate bills that students have proposed in order to possibly change the Kentucky government.”

Every year at this conference, there is an election involving 12 candidates who run to be in charge of KYA for the following year. After the first day of elections, seven candidates move on. On the second day, four of the candidates are placed into their new positions.

French ran for office not only for himself; he ran for something much bigger. He said, “I didn’t run to win. I wanted to overcome my fears about talking about my mom and dad. I wanted to face it head on to show people I could.”

At French’s first KYA, he was quiet and didn’t talk much. His mother had committed suicide just a few months before KYA. His dad has been in and out of prison twice.

French said, “My first KYA was a rush, like a blink-and-you’ll-miss-it kind of thing. I was still recovering over my mother, and I just felt awful the whole time. I remember talking to someone there about it a long time ago. I never got that person’s name, but she was so kind and willing to hear me out. That’s what I’m trying to be now.”

French ran on three main platforms: mental health classes, coal miner jobs, and prison reform. These platforms were incredibly close to his heart. His mom and dad both heavily influenced them.

French said, “The speeches were extremely personal. I went out there and gave it my all.”

French delivered powerful speeches about the loss of his mother and the importance of mental health classes.  He went up in front of more than 1,000 strangers and poured out his heart and soul about his mother and father.

After French’s speech, the room was silent, and many were shocked. The assembly responded with a standing ovation, and many approached French and told him their stories.

French said, “It shook my world. I thought I was alone, but people came up to me and told me I affected them. It feels good to impact others.”

After the first round of voting, French and six others remained. French said, “I was shocked. I really didn’t think I was going to win.”

After the second round of voting, French was announced as the Commonwealth Senate President. He said, “I felt amazing, I affected so many people’s hearts, and they voted for me in support.”

Trinity has had a rich KYA history, regularly winning Delegation of Excellence awards, along with many Outstanding Speaker honors, but this was the first time a Trinity student was elected as a presiding officer.