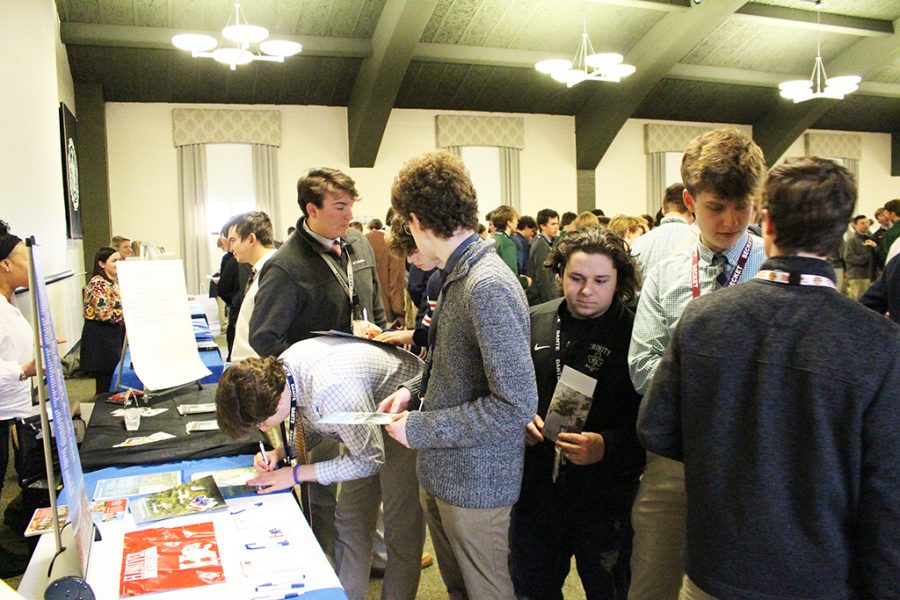 Selecting the right college or university is sometimes a rigorous process. Trinity juniors attended a college fair in the Convocation Hall Feb. 11.

Hazing. The word brings to mind embarrassment and ridicule. How much does this previously condoned initiation practice still exist?

HazingPrevention.org defines hazing as “any action taken or any situation created intentionally that causes embarrassment, harassment or ridicule and risks emotional and/or physical harm to members of a group or team, whether new or not, regardless of the person’s willingness to participate.”

Hazing often happens to students who are rushing for a fraternity or sorority. Many efforts have been made in an attempt to eradicate these acts, but in some communities, hazing is still alive and well.

Spalding University Greek Life Affairs representative Anna Foshee shared some insight on what hazing can look and feel like: “Hazing encompasses bullying, any social or academic pressure to do something that a student may not want to do. They feel that they must do this in order to have a certain outcome or to be accepted by a club, organization, or a group of peers.”

Many times, hazing can involve binge drinking. According to the National Institute on Alcohol Abuse and Alcoholism, annually “about 1,825 college students between the ages of 18 and 24 die from alcohol-related unintentional injuries, including motor-vehicle crashes.”

Surprisingly, hazing has been around for far longer than any of us have been alive. What seems to be the case for a lot of fraternities and sororities worldwide is the fact that some of these practices have been grandfathered into the foundations of their fraternity or sorority.

Students involved in Greek life, especially ones in position of authority in their respective fraternity or sorority, are afraid to break tradition that may involve these practices and move their institutions in a different direction — thinking it may show disrespect or disloyalty.

The question is, what should be done that isn’t already being done to prevent hazing? Some students come to their respective universities with already developed drinking habits, and a college atmosphere can make these habits worse.

Some hazing involves a pledge being forced into drinking dangerous amounts of alcohol in order to gain a “superior’s” respect and feel accepted.

Bellarmine University freshman Emily Dalton shared her thoughts about anti-hazing efforts made worldwide: “Colleges should be more vocal about it and not try to sweep it under the rug. (We need) a lot of awareness because we do a lot of alcohol prevention, but nothing is really addressed about hazing to (freshmen).”

Studies have shown that most of the time hazing is about power and control. It does not promote unity; it does quite the opposite as it divides students.

Author Hank Nuwer shared why he thinks people participate in hazing in an interview with NPR: “The power in a group-think type of mentality, where everybody is willing to do anything to keep the esprit de corps, leads to individuals acting as they would not act ordinarily because they’re in the group.”

This “power of the group” is often the reason that students don’t report hazing to the administration or a trusted adult.

Hazing has come far from its beginnings. The original purpose of hazing in fraternities and sororities was to test a pledge’s devotion to the group by putting them through extreme and uncomfortable positions. Since then, hazing has evolved in some places and continues to become more serious.

Alex Crumes, a senior at California Polytechnic in San Luis Obispo, shared how serious hazing has become for both students and faculty: “There are campus police, resident advisers, and other faculty that regulate these rules, but still there are ways around it.”

There is still a great deal being done in an effort to end hazing. While hazing still takes place at colleges and universities throughout the country, it does not occur on many campuses. According to bestcolleges.com, states are introducing more legislation that have stricter punishments to stop hazing. As of today, 44 states have anti-hazing laws in place.