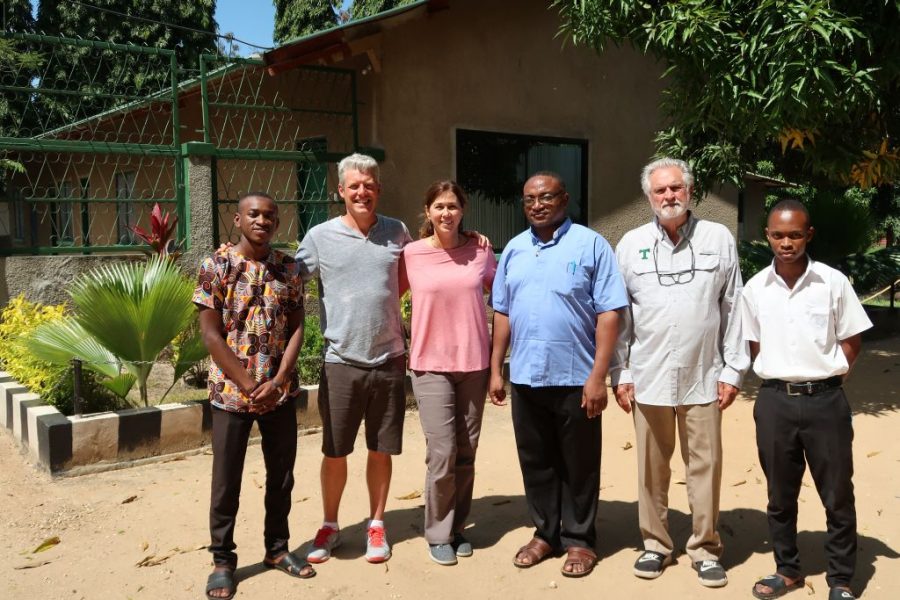 The name Tanzania might conjure images of  elephants, lions, leopards, buffaloes and rhinos. There is, however, much more to this diverse eastern African country located on the coast of the Indian Ocean.

Despite 67.9 percent of the population living below the poverty line, a hopeful spirit reigns. Fr. John Judie Ministries helps feed that spirit.

Judie, a retired priest and former pastor of Immaculate Heart of Mary and Christ the King churches founded his ministry in 1994 following a trip to eastern Africa. According to a story in The Record, “The non-profit ministry sponsors seminarians and priests in several of the continent’s countries, including Tanzania and Zambia.”

Mr. Eddie Turpen, a 1960 Trinity graduate, along with Trinity teacher Jason Daniel and his wife, Susan, went to Morogoro, Tanzania, to visit Judie last summer from June 14 to June 26.

Turpen said Judie is a longtime friend. He said, “Fr. John Judie has been my pastor for about 23 years, two different churches, and the last church was Immaculate Heart of Mary, which is downtown.”

Jason Daniel, a teacher, mentor in Aquinas House, and moderator of the Guitar Club, described the way the Tanzania trip came about. He said, “I first met Eddie because he’s my neighbor, but he comes to just about every Trinity football and basketball game; he’s a really loyal alum. He has a grandson who is a freshman here.

“He would always talk about Fr. Judie, and he would say, ‘Some day I want to go over there with him to Tanzania.'”

Susan asked Turpen, “What are you waiting for; you’re not getting any younger. Why don’t you go; why don’t we all go?”

Jason said that following the “little conversation,” they decided to make the trip happen.

Passports, visas, vaccinations and airline tickets followed — and away they flew.

“The Daniels helped me tremendously by getting me visas and all the supporting documents,” Turpen said. “We boarded the airplane on June 13, 2019 — then bingo, we are there in Dar Es Salaam, Tanzania.”

Turpen said Judie met the trio when they arrived. “(Fr. John) had made arrangements for us to stay overnight at Msimbazi Spiritual Centre, our first taste of Tanzania hospitality.”

“The choir was dressed in yellow and the music was very beautiful,” Turpen said.

Jason said, “Driving anywhere was quite terrifying because sometimes there’s no road or just a dirt road, a line, motorcycles zooming by you on bikes. I saw a guy riding a bike and, on the back, he had an entire three-person couch, just sitting on the back of the bike — no idea how he did that.”

Turpen said, “We visited the Mgolole Motherhouse and Orphanage. We were greeted with a dance routine from three older boys. Later we went to the nursery. There were about 20 children ranging in ages three weeks to two years old. Jason and Susan helped with the bathing, the cocoa butter grease down, and the choice of clothing from a pile of clean clothes selected to fit.”

Of the orphanage, Jason said, “These kids were very happy. You don’t have to have a whole lot of stuff to be happy; that’s one thing that I learned from the trip.”

The highlight of the trip for Turpen was the day they visited St. Peter’s Junior Seminary because Turpen sponsors one of the seminarians in Judie’s ministry.

Turpen visited the home of seminarian Abel Ryngu, a senior in high school.

Turpen said, “This was a special blessing to me. Abel is a seminarian that I support for his tuition through the ministry. It was a great joy meeting him. Always before, you would get a letter saying how they’re doing, and now the idea of going and actually meeting the kid you are helping out was wonderful.”

Turpen said a seminarian can be sponsored for “$250 a year — pays for room, board and the education, so what a bargain.”

During four months Judie spent in Tanzania, he learned that “the seminaries are full, very full; everyone has to pay a certain amount of school fees to go. Those that are from very poor families, if the families cannot afford to pay the school’s fees, the seminarians will be dismissed and sent home.

“Now I said to myself, what’s wrong with this picture because here in the US, people are praying and crying for more seminarians. God is answering the prayers in Africa, and these boys who want to pursue the priesthood were being sent home because nobody can pay the school fees.”

Judie was glad Turpen could meet the young man he is sponsoring. “This seminarian that Eddie is sponsoring, I was happy that we could arrange and go visit him at his home so Eddie could meet his parents and see the condition of the village.”

Turpen said, “We learned that this particular student from the day that he walked into the seminary, a freshman in high school, he has been a straight-A student all along, top of the line.”

Judie agreed: “All of this potential but no resources; all it took was an opportunity, that’s all.”

The ministry now operates in 41 countries with hundreds of seminarians being sponsored today. Judie said, “I always say this is God’s business. I’m just trying to keep up with what God is doing. I never imagined myself doing any of this, but here we are.”

Towards the end of the trip, Turpen and the Daniels visited St. Monica English Medium School, Kihonda.

Jason said, “I found out that a lot of the teachers there have the same concerns that we teachers have here about our students; in some ways, it’s very different, and then in other ways, you find out that the basic human issues are about the same. They struggle both practically and emotionally with students who have to travel great distances to get to school, or who are unable to pay their school fees. Nevertheless, they band together and lean on one another for support.

“They were shocked to learn of our issues with guns and school violence here in the states. These sorts of issues are unheard of there.”

The group attended a number of Masses and saw many different traditions.

Jason said, “At St. Monica Catholic Church, Mass lasted about three to four hours with singing from a choir dressed in white and a beautiful sound. The masses were always in Swahili.”

Turpen said, “We then visited Grail Sisters, and Fr. John had a Mass in their small chapel. The chapel could hold no more than 20 people, and the music from the resident children filled every corner.”

The trio also spent time at the Mikumi Game Reserve. “I think we saw any animal you could think of being in Africa,” Turpen said. “Elephants, monkeys, giraffes, lion cubs, warthogs, zebras. It’s wide open, animals there just living in their natural habitat, and you’re just driving around them. It’s not like here where they’re behind bars.”

Jason said, “It was just incredible, just seeing the animals in their natural habitat; that was a real highlight for sure.”

At one point after 13 productive and perspective-changing days in Tanzania, Turpen and the Daniels had to say their goodbyes and head back home.

For all three, memories revolved around children and the future of the world.

Susan said,“They were always a joy. Like children all over the world, they are curious, fun-loving, playful, and in need of love and comfort. They were also the greatest reminder of the fact that we are all God’s people, all members of his family, and we should treat one another likewise. In spite of the poverty, limited or lack of education, children, in particular, are very inventive and creative.”

Judie said, “I can honestly say this, I’ve never heard children ever begin a sentence with I want. That struck me a long long time ago. If I asked them where is your fútbol, they’ll say we don’t have one, and that’s all they’ll say. They just leave it there.

“Children, by and large believe it or not, don’t beg. You know, they will say what they have and don’t have, but they’re not beggars; they know how to live their reality. They’re happy if you’re there to do something to help them, of course.”

Turpen described a moving moment at one of the orphanages: “I met Teddy, a small boy in the nursery. When I would visit, he was always watching me, as if he was picking me. I took his picture and sent it home to my wife and two daughters. I told them I had found Edgar Lee Turpen III. The response was ‘Bring him home,’ with one daughter saying we will call him Teddy, a nickname for Edgar. All were disappointed when I realized I couldn’t bring him home with me.”

Of experiencing life in Tanzania, Judie said, “There’s a special joy that I get in being able to share this experience with those willing to come. It’s like a treasure — you want to share it, something so good, you don’t want to keep it to yourself, and I have seen over the years how it has touched and affected the other visitors who have come.

“Number one, it puts a lot of things in life in a totally new perspective; you learn to appreciate a different situation of living that you’re not accustomed too, exposed to for the first time.

“Number two, it opens them up to some avenues of giving and sharing beyond the borders and boundaries of life here, and so that’s the mobile connection that’s been building on the relationship level.”

Jason reflected on the trip’s impact: “This trip changed me – it made the world seem smaller in some ways and immensely large in others. But I definitely felt a newfound kinship with humanity, a sense that we all have a duty to make the world a better place for all. I also left filled with gratitude and happiness for the opportunities afforded me. The people I met while I was there have not left my thoughts since I have returned, nor have they left my heart.”

Turpen said he is forever thankful to Judie and all of his efforts to make the trip so meaningful and enjoyable. He is grateful to his fellow travelers, Jason and Susan Daniel, who made sure he kept pace.

He is grateful to have met the seminarian he helps support through the ministry, Able Ryngu, and all the amazing people he met and talked with in Tanzania.

Turpen said, “All the pictures and stories I have read from Fr. John did not prepare me for what I experienced — a constant movement of people to live and survive. Young children playing with homemade toys with whatever materials were available. A mix of traffic which included walkers, bikes, motorcycles, cars, buses and trucks of all kinds.

“I found out that the head elephant always brings up the rear (to guard and protect the rest). So, I will always keep that info in my trunk.”