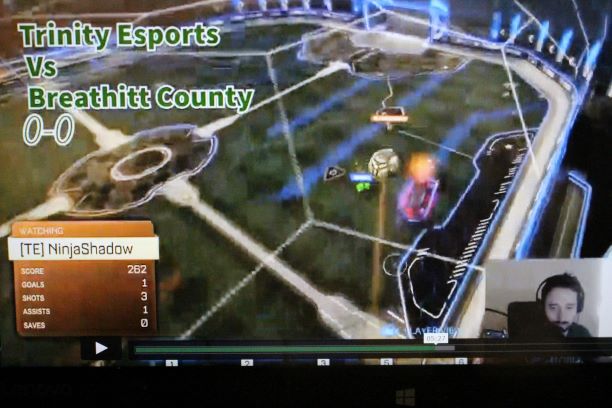 Trinity E-Sports, coached by Mr. Ben Sobczyk, is in its inaugural season.

The inaugural season for Trinity’s Esports team has included competition against some top squads from around the state. The Rocks, 2-1 after their first three matches, have faced Breathitt County, St. Xavier, Shelby County, McCreary Central High and Marshall County thus far.

The team plays a game called Rocket League, described on the Trinity Athletics site as “soccer with cars that can fly.  The game is now an official KHSAA sanctioned sport complete with a state title.”

Trinity teacher Mr. Ben Sobczyk, who coaches the team, is quoted on the Athletics site: “I am so excited to get our program off the ground. This will be completely free for Trinity students to compete in and will give our students another outlet to get involved. Members of Trinity’s Esports team should anticipate spending at least three hours a week of regular practice as well as match nights. As with any sport/extracurricular/club at Trinity, grade checks will be weekly, and there will be certain behaviors expected from the students on our team.”

There are now more than 115 universities across America offering Esports scholarships, ranging from small amounts to full rides, including stipends.

Senior Trent Thomas, varsity Esports member, said of their coach. “He’s dedicated. He wants to see this generation get an opportunity to play these games.”

Sobczyk said, “This is the first step into the very large pool that is Esports. As of right now, it’s pretty small, but it’s going to get a lot bigger in the next few years. All of the pressure and all of the glory is going to be completely on this group. I didn’t inherit this program, so every single bit of this, if it goes right or wrong, is on our shoulders. When it succeeds, and I believe it will, the glory’s going to be completely on these kids.”

Brok Sholtes has put in some serious time to help the Rocks be successful. He said, “I have 57 hours in the past two weeks on Rocket League, so I probably spend about 30 hours a week practicing.”

Sholtes, team captain, said he has been “wanting to compete on an organized team for a long time, and the opportunity came, so it’s been exciting.”

Thomas, who also excels at video games, said, “I’ve been playing Rocket League since 2016, and when I heard that we were starting an Esports team, I wanted to get a feel for the competitive team vibe. I wanted to play on the team so I could play for something that actually means something.”

Sholtes and Thomas encourage other students to consider playing for the Esports team.

Thomas said, “No matter what skill level you’re at, just join, and we’ll find a spot for you.”