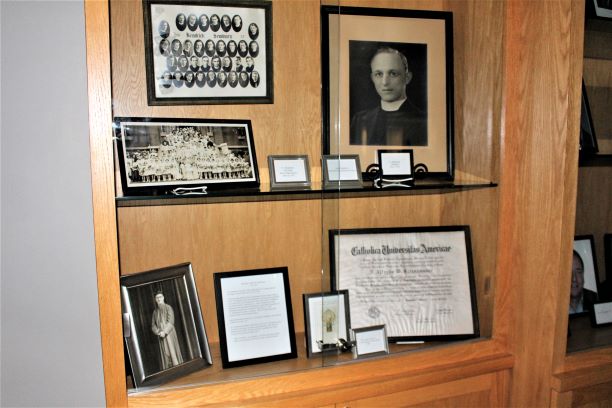 A collection of photos of Monsignor Alfred Steinhauser and other memorabilia can be found in a case in Alumni Hall.

Current students hear the words Steinhauser Gymnasium on a regular basis. But how many of them are aware of how much the name Steinhauser means to Trinity High School. The inclusion and excellence Trinity is known for began with its founder, Monsignor Alfred Steinhauser, in the fall of 1953.

Dr. Rob Mullen ’77, school president for the past 20 years, said it was Steinhauser’s values, ideals and ingenuity that created Trinity’s foundation. He said, “It’s not too much of a stretch to say that everything we do is built upon his vision.”

He went on to attend the St. Meinrad Preparatory Seminary School, Kenrick Seminary, and Catholic University before he was known as Monsignor Steinhauser. As the population of Louisville was expanding in the east, Archbishop John Floresh decided there needed to be a new high school at the forefront. Steinhauser was charged with becoming the school’s first principal for a student body of 106 freshmen.

From that point, Steinhauser went out to every Catholic grade school in the area and told their parents that the new high school would be the place for them. Dr. Mullen said that in addition to choosing the school’s colors and mascot — and dealing with a tight budget — Steinhauser instilled Trinity with values that revolved around inviting students of all ability levels to attend the home of the Rocks.

“A major characteristic of this school is resourcefulness or making do with what you have,”  said school chaplain Fr. Dave Zettel, who was a member of the school’s second graduating class in 1958 and has been part of Trinity for nearly 60 years as student and teacher.

Ms. Mullen said he loved and cared for each and every student and faculty member the same. She said, “That’s how he got the school going. He could relate to people in the simplest way. Parents, priests, the faculty, the students, and across the board, he was in the mix.”

Even though he was the principal, he interacted with everyone equally. Dr. Mullen said, “He had a plan to figure everything out, but he also had a very soft side.”

Steinhauser believed it was important to stay involved in all facets of Trinity.

Dr. Mullen said, “He was not only creating a framework on how to build the school, but he was also forming men.”

An example of Steinhauser’s love for Trinity came during the school’s first athletic event, a freshman football game against future rival St. Xavier.

The Rocks were inside the five-yard line, seeking their first-ever touchdown. As the ball was snapped, it was handed off to the running back.

Dr. Mullen said, “Dave Webber scored a late touchdown to put us up 7-6.”

As he was on the ground, the first thing Weber saw when he looked up was a man in mid-air. This man was dressed in all black and was in the first row. This man was Steinhauser, who was jumping with pride. “This was our first touchdown and ended up being our first victory over St. X,” Dr. Mullen said.

Trinity students continue the legacy of Monsignor Steinhauser in many ways, from simply going to Catholic grade schools to encourage students to attend Trinity or in their friendly interactions with faculty.

As Dr. Mullen said, Steinhauser is smiling from heaven as he sees where Trinity is now.

Zettel said, “I’m sure now he must be busting his buttons because this place is going crazy. We are at the top of the world right now.”

Steinhauser’s legacy is expressed in the school’s motto: “Maximo Animi Ardore” — maximum spirit of the soul.